Start a Wiki
Zoey's mother is a character in Rudolph the Red Nosed Reindeer the Movie, the wife of an unnamed buck and is the mother of Zoey.

She first appears briefly with her husband and daughter watching Santa and the Flyers take off on Christmas Eve.

She is then seen years later along with her husband, Blitzen and Mitzi asking Santa for help to find Zoey and Rudolph. She is later seen with the other villagers just moments before Rudolph and Zoey return.

She is later seen with her husband reuniting with Zoey after Rudolph, Slyly and Leonard rescue her from Stormella. She is last seen next to her husband, daughter and Arrow welcoming Rudolph, Santa and the Flyers back from traveling through the storm.

Zoey's mother has light brown and cream fur, black tipped ears and dark brown eyes. She looks like an older version of her daughter that Zoey's fur is a shade darker than her mother's (due to getting the dark shade of her fur from her father).

Zoey's mother and father with Blitzen and Mitzi.

Zoey's mother with her husband.

Zoey's mother and father reuniting with their daughter. 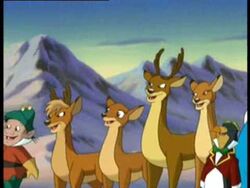 Zoey's mother, her mate, daughter and Arrow watch Rudolph and the Flyers return.

Add a photo to this gallery
Retrieved from "https://rudolphtherednosedreindeer.fandom.com/wiki/Zoey%27s_mother?oldid=9637"
Community content is available under CC-BY-SA unless otherwise noted.