Rudolph is the son of Blitzen and Mitzi, the nephew of Dasher, Comet, and Cupid, the cousin and former rival of Arrow, the best friend, later boyfriend of Zoey, the lead reindeer on Santa's sleigh team, and the main protagonist of Rudolph the Red-Nosed Reindeer: The Movie and it's sequel book Rudolph Saves The Sprites.

Rudolph is first seen in his house as a newborn fawn taking his first steps. He stumbles into a pile of hay, causing him to sneeze, and his nose to light up for the first time.

He is later seen with his parents showing him their village, where he meets his uncles Dasher, Comet, and Cupid. Rudolph is tickled by Cupid, and as a result his nose glows again. This causes him to be laughed at by the other villagers. He leaves with his parents to see Santa's toy factory, where he is given a teddy bear by one of the elves and witnesses Stormella threatening to cast a storm if anyone crosses her Ice Bridge.

A year later Rudolph starts school, where he is ridiculed by his mean-spirited cousin Arrow and the other students because his nose, except by a young doe named Zoey. Rudolph leaves the school, where he meets Santa, who tries to convince him that his nose is grand.

At The Christmas Eve Launch, Rudolph watches his father, along with the other Flyers, guide Santa's sleigh off into the night. Afterwards, he acts out a speech about himself joining the team (which includes thanking his parents, Santa and most of all the doe of his dreams: Zoey) and accepting a Medal of Valor. Zoey joins him and says that she'd like to be his friend, and that she doesn't care about being seen with him. She says that she finds his nose unique like him, and asks Rudolph if he'd like to take a walk with her. They end up under mistletoe, but before the two can , Arrow, who also has feelings for Zoey, arrives. Zoey tells him that she and Rudolph were just talking but Arrow says it looked more like kissing to him. Zoey then says to Arrow there's no reason to be jealous as she and Rudolph are just friends. Arrow denies being jealous of Rudolph and tells Zoey to come with him, which Zoey reluctantly does and Arrow laughs at Rudolph and calls him a loser. As he watches the two leave, Rudolph quietly pleads for Zoey to look back which to his happiness, she does causing Rudolph to realise she likes him and he jumps around in joy.

Years later, a now teenaged Rudolph is seen with Zoey preparing to compete in The Junior Reindeer Games. Before the start of the games, Zoey gives him her pendant for good luck and gives him a kiss. At the start line for the first game, "The Sleigh Race", Arrow, who is now in a relationship with Zoey, notices the pendant on Rudolph and reminds him that Zoey is "his doe". Rudolph repiles that Zoey "isn't a trophy and shouldn't be treated like one".

During the race, Rudolph and his elf driver Doggle see Arrow cheating by ramming his sleigh into another competitor, causing them to crash. When neck-neck with Arrow, Rudolph is able to jump over a broken sleigh (which had also been knocked off course). When nearing the finish line, Arrow starts taunting Rudolph by saying that Zoey only nice to Rudolph because she feels sorry for him. Rudolph tells him that isn't true, but Arrow replies that Zoey told him so. Overcome with rage, Rudolph's nose starts to glow and blinds Arrow, causing him and his elf driver to crash, allowing Rudolph and Doggle to win. Unfortunately, the referee disqualifies Rudolph for this incident and makes Arrow winner instead, much to the anger of Blitzen and Zoey. Later, Rudolph overhears Blitzen arguing with the referee, saying that his red nose wasn't Rudolph's fault, and that it was an accident, (attempting to persuade him that Rudolph couldn't have controlled his nose's glow and avoided blinding Arrow). Rudolph thinks that his father is ashamed of him, and decides to run away from home, leaving a letter to his parents.

After running away, Rudolph goes into a cave and meets a arctic fox named Slyly, who at first tries make him leave the cave, but after Rudolph fights him off, he lets him stay. In the morning the cave is blocked by an avalanche so the two are forced to find a new home. They find a cave owned by a polar bear named Leonard, and trick him into leaving. Leonard realizes he's been duped, however, and returns in anger. After Rudolph apologizes, though, Leonard lets him and Slyly stay. Later that night, Rudolph has a nightmare about the remarks people made about his nose and wakes up to get fresh air. Whilst he is out there he meets "The Sprites of the Northern Lights", Twinkle, Sparkle, Glitter, and Aurora, who tell him that they are admirers of his nose and that everyone has a light inside them but only a few have a light bright enough for the whole world to see. They reveal that Zoey has been captured by Stormella and teach him how to control his nose by telling him to think about everyone he loves and everyone who loves him and to let this love be the light of his heart.

Rudolph and Leonard travel to Stormella's fortress Ice Castle and find Zoey in an ice dungeon, but are caught and imprisoned by Stormella. As a result of Zoey crossing her Ice Bridge, Stormella reveals that she will ruin Christmas with a storm of the century. During this time, Rudolph and Zoey confess their feelings for each other. Afterwards, Slyly arrives and steals the key to free them, the group start to leave, but are confronted by Stormella (who is joined by her wolves and her penguin butler Ridley), who threatens to harm Zoey. Rudolph jumps in front of Zoey and his nose glows, causing Stormella to fall over the edge of a cliff. With the others help, however, Rudolph saves her. As thanks, Stormella grants Rudolph one wish, so he asks for her to be nice and turns down her offer to give him a normal nose. Stormella becomes nice, but says that she can't call off her storm. The group are then found by Doggle and Boone, who were sent out by Santa to find Rudolph and Zoey. They return home, where they are happily welcomed back by their parents and the other villagers.

After seeing the light coming from Rudolph's nose, Santa asks him to guide his sleigh through the storm, to which Rudolph accepts. After good luck wishes from his friends and a kiss from Zoey, Rudolph is given a Medal of Valor by Santa, before guiding the other Flyers through the storm to deliver the presents. The next day it is shown that Rudolph left presents for the others, such as his teddy bear for Slyly, his red scarf for Leonard, and Santa leaves a new ice statue for Stormella. When Rudolph returns from the flight, everyone celebrates and sings "Rudolph the Red Nosed Reindeer".

In this book set after the film, Rudolph along with his now doefriend Zoey look for the Sprites after they fail to show up at Santa's Winter Celebrations to put on their light show, after Santa, Blitzen and the other Flyers were unable to find them.

He and Zoey follow a path of blossoms that lead to Ice Castle and find the Sprites in an ice cage and uses his nose's light to melt the bars. Rudolph and Zoey also learn that Ridley took the Sprites to put on a surprise private light show for Stormella since she has never been invited to Santa's Winter Celebrations (due to her being wicked in the past). Rudolph says that Stormella is nice now and maybe Santa wouldn't mind if she came.

On the day of the light show, Stormella is guest of honour and the Sprites spell out a message in the sky: THANKS RUDOLPH.

Rudolph had a light brown coat with white spots as a yearling, and dark brown and cream fur and short antlers as a teenager. He also has black tipped ears, brown eyes, blond hair, and a bright red nose. Like all Flyers, he wears a Medal of Valor.

In the books Rudolph the Red-Nosed Reindeer: A Retelling of the New Animated Movie and Rudolph Saves The Sprites, Rudolph's appearance remains the same except his antlers are smaller than they are in the film and look more like the antlers his Rankin/Bass counterpart had as a yearling.

Rudolph takes after both of his parents: He has Mitzi's fur colour and her grace and style whilst he has Blitzen's eye colour and smile. Though it's unknown where Rudolph inherited his blond hair from as neither Blitzen or Mitzi have blond hair. Though he may have gotten it from either Cupid or Comet as they are the only two of Rudolph's uncles to have blond hair or he might have gotten it from one of Mitzi's relatives.

According to the song "What About His Nose?", Rudolph has Mitzi's grace and style and Blitzen's smile.

Rudolph with his parents.

Rudolph with his mother Mitzi.

Rudolph with his father Blitzen and his uncle Cupid.

Rudolph playing with a ball

Blitzen and Mitzi giving Rudolph a tour of Santa's workshop.

Rudolph with his teddy

Young Rudolph with Zoey and Arrow at school.

Rudolph expressing his wish to become a Flyer.

Arrow and most of the students laughing at Rudolph.

Rudolph hiding his nose in snow. 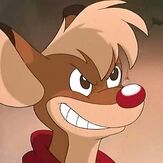 Rudolph watching Santa and the Flyers take off.

Rudolph about to kiss Zoey under the mistletoe.

Arrow catching Rudolph and Zoey together

Rudolph's reaction to being called a "red nosed reject" by Arrow.

Rudolph finding out Zoey likes him.

Rudolph and Zoey preparing for The Reindeer Games.

Rudolph and Arrow at The Reindeer Games.

Rudolph imaging Zoey being with him.

Rudolph introduces himself to Slyly

Rudolph meets the Sprites of the Northern Lights.

Blitzen and Mitzi reunite with Rudolph.

Getting kissed by Zoey.

Rudolph with his father Blitzen.

Rudolph guiding the Flyers through the storm.

Add a photo to this gallery
Retrieved from "https://rudolphtherednosedreindeer.fandom.com/wiki/Rudolph_(Rudolph_the_Red-Nosed_Reindeer:_The_Movie)?oldid=9804"
Community content is available under CC-BY-SA unless otherwise noted.