Start a Wiki
This article is about the Rankin/Bass character. For the character from the 1944 film see Rudolph (1944) and for the 1998 film, see Rudolph (Rudolph the Red-Nosed Reindeer: The Movie)

Rudolph was born one spring to Donner and Mrs. Donner, but moments after his birth, his nose lights up much to the shock of his parents. Shortly after, Donner's boss Santa Claus arrives to see Rudolph and also sees his nose light up and says he hopes it will stop if Rudolph wants to join the sleigh team. Wanting his son to look normal, Donner puts mud on Rudolph's nose, but it doesn't stay on.

One year later, Donner places a fake nose over Rudolph's nose, that makes it look normal, but unfortunately makes him talk in a odd voice. Rudolph goes to take part in The Reindeer Games with the other yearlings where he befriends a young buck named Fireball and falls in love with a beautiful and kind doe named Clarice. After being told by Clarice that she thinks he's cute, Rudolph leaps high in the air with joy which impresses Donner, the coach Comet and Santa. However after a playful tussle with Fireball, Rudolph's fake nose falls off revealing his red one, which causes him to be ridiculed by Fireball and the other yearling bucks and is banned from the rest of the games by Comet. Rudolph runs off, but Clarice (who doesn't mind Rudolph's red nose) catches up with him and sings "There's Always Tomorrow" to him, but then Clarice's father arrives and tells Clarice to come home as he doesn't want her to be seen with "a red-nosed reindeer" which she reluctantly does.

After Clarice and her father have left, Rudolph meets and befriends an elf named Hermey, who has left his job at Santa's workshop to become a dentist and the two decide to run away together. However, Rudolph's nose attracts a Snow Monster named Bumble and the two and hide from him and are found by Yukon Cornelius who helps them escape Bumble. The trio arrive at The Island Of Misfit Toys and asks the island's ruler King Moonracer if they can stay. Moonracer says that only misfit toys can stay but let's them say the night and asks Rudolph to ask Santa to find homes for the misfit toys. That night while Hermey and Yukon are asleep, Rudolph leaves, not wanting to allow his nose to get them in trouble again. Rudolph goes off and befriends two polar bear cubs, but it doesn't last long because of his nose.

Months later, Rudolph now a young handsome and Responsible adult decides to return home but is laughed at by three other young bucks. Rudolph returns to his cave and finds it empty and learns from Santa that his parents and Clarice had left to look for him. Rudolph leaves to look for them and finds them being held hostage by Bumble and battles him, but is knocked unconscious by the Snow Monster. Luckily, Hermey and Yukon arrive and knock out Bumble before Hermey pulls out his teeth. After regaining consciousness, Bumble still tries to attack the group but Yukon sacrifices himself by knocking Bumble off a cliffside taking himself with him.

Rudolph, his parents, Clarice, and Hermey arrive at Santa's workshop where they are happily welcomed by the other reindeer and elves. Keeping his word with King Moonracer, Rudolph tells Santa to find the misfit toys homes and Santa agrees to do just that. Later, Santa says he won't be able to deliver the presents because of the snow storm. But after seeing Rudolph's nose light up, he asks him to guide his sleigh to which the reindeer agrees. During the song "Have a Holly Jolly Christmas", Rudolph kisses Clarice on the cheek under the mistletoe. Rudolph and the other sleigh team members guide the sleigh off into the night whilst being watched by Donner, Mrs. Donner, Clarice, Hermey and the other reindeer and elves.

In it, he is told by Father Time that Happy, the Baby New Year, has gone missing because everyone laughed at the sight of his oversized ears. Having put up with similar teasing about his nose in the first special, Rudolph says that he knows how Happy felt. Accompanied by Big Ben, he ventures to the Archipelago of Last Years, since Happy has presumably gone there.

In his travels, he is eventually joined by One Million BC, Sir 1023, and 1776. After Happy is captured by a giant vulture named Eon the Terrible and brought to the Island of No Name, Rudolph finds him and shares his own story with him, encouraging him to overcome his problem.

Rudolph's last appearance in a Rankin/Bass Christmas production was the made-for-TV movie Rudolph and Frosty's Christmas in July. By the time of its events, Rudolph has become great friends with Frosty the Snowman and his family, so much that Frosty and his wife Crystal's twin children, Chilly and Milly, look up to him as their adoptive uncle. The film also provides a more detailed backstory for Rudolph's nose, explaining that Lady Boreal made it shine as a defense against the evil Winterbolt, and that its power lasts only as long as Rudolph uses his gift for good.

During the events of the film, Rudolph, along with Frosty and his family (who are wearing amulets that prevent them from melting in the hot weather, provided by Winterbolt pretending to be a nice person), appear as guest stars at the Sea Side Circus at the Beach's Fourth of July show, in order to save it from being shut down. However, Winterbolt employs an evil reindeer named Scratcher to take advantage of Rudolph's kindness and steal the circus' money. Upon finding out, Rudolph reluctantly agrees to take the blame after making a deal with Winterbolt to extend the powers of the amulets that Frosty's family is wearing. Because of this evil act, his nose stops glowing. At the climax, Rudolph fights Winterbolt at the desert in the night. Winterbolt attacks Rudolph by tying him with his snakes. However, Rudolph handily gets himself out of the snake’s coil and take Frosty’s hat to save him.

However, after he manages to retrieve Frosty's magic hat after Winterbolt steals it, his nose regains its glow. In the end, after Winterbolt is vanquished and Jack Frost arrives to save the melted Frosty family, Rudolph decides to temporarily stay with the circus until they've gotten out of their debt.

Rudolph the Red-Nosed Reindeer and The Island Of Misfit ToysEdit

In this film (which was created by Goodtimes Entertainment, who made Rudolph the Red-Nosed Reindeer: The Movie), Rudolph along with Hermey, Yukon, Bumble and Clarice set out to defeat a being called the Toy Taker, who is stealing toys from their owners and has recently taken toys from Santa too.

At the climax of the film, Rudolph and the others discover that the Toy Taker is in fact a damaged looking teddy bear called Mr. Cuddles, who took the toys to prevent them from being cast out by their owners when they get too old for toys, after his owner Steven grew older and stopped playing with him, before being supposedly thrown out. Santa explains to Mr. Cuddles that Steven did not mean to throw him out and intended to keep him. Mr. Cuddles is then repaired by Queen Camilla, before being taken by Santa to be given as a gift to Steven's daughter.

A subplot in the film shows Rudolph considering being given a normal nose by Queen Camilla, but later decides against it after Clarice tells him that she loves him just the way he is. He also teaches Clarice how to fly as well.

Baby Rudolph with his parents and Santa Claus

Rudolph and the other bucks listing to Comet

Fireball telling Rudolph to stay away from him.

Rudolph being teased by Fireball and the other young bucks

Older Rudolph and Clarice with Donner. 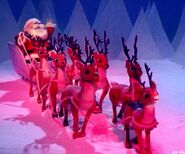 Rudolph, Santa and the sleigh team prepare to take off.

Rudolph in Rudolph and Frosty's Christmas In July. 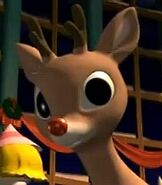 Retrieved from "https://rudolphtherednosedreindeer.fandom.com/wiki/Rudolph_(Rankin/Bass)?oldid=9964"
Community content is available under CC-BY-SA unless otherwise noted.