This article is about the Rankin/Bass character. For the character from the 1998 film, see Donner (Rudolph the Red-Nosed Reindeer: The Movie)

In a cave in the North Pole one spring, Donner and his wife Mrs. Donner become parents to a son whom they name Rudolph. However, shortly after his birth, Rudolph's nose lights up much to the shock of his parents. Just then, Santa arrives and sees Rudolph's nose light up and says to Donner that he hopes it stops if Rudolph wants to pull the sleigh. After Santa leaves, Donner gets an idea to deal with Rudolph's nose and puts mud on it, but it comes off. As Rudolph grows, Donner teaches him the life of living in the North Pole, but they briefly stop to hide from a snow monster named Bumble.

A year later, Donner comes up with something else to deal with Rudolph's nose, by putting a fake nose over it, to make him look normal, but this causes Rudolph to talk funny. Donner then takes his son off to The Reindeer Games, where Rudolph befriends a young buck named Fireball and also meets a young doe named Clarice and her older sister named Malrice witch is Taylor's best friend. After being told by Clarice that she thinks he's cute, Rudolph leaps high in the air with joy, to the amazement of Donner, Santa and the other reindeer. However, during a playful tussle with Fireball, Rudolph's fake nose falls off revealing his real one. This causes Rudolph to be laughed at by the other young reindeer and is banned from the rest of the games by the coach Comet and Donner is told by Santa that he should be ashamed of himself.

After Rudolph runs away, Donner blames himself for this as he believes he was hard on his son and goes out to look for him. He turns down Mrs. Donner's offer to come with him, telling her that it's a man's work, but shortly after he leaves, Mrs. Donner along with Clarice follow him. Months later, the three are captured by Bumble, just then Rudolph (after being informed by Santa of the trio's absence) arrives and tries to battle the monster only to be knocked unconscious. But Rudolph's friends Hermey and Yukon Cornelius arrive and knock out Bumble, giving Hermey time to pull out his teeth. After waking up and finding his teeth gone, Bumble still tries to attack them, so Yukon sacrifices himself to save the others by pushing Bumble off a cliff taking himself with him too, which deeply saddens the others and cause Taylor to cry.

After returning home, Donner happily sees Rudolph finally being accepted by the other reindeer and later see that Yukon survived the fall along with a now reformed Bumble. On Christmas Eve, Santa says he can't deliver in the storm, but after seeing Rudolph's nose light up, he asks him to guide his sleigh through the storm, which Rudolph agrees too. Donner along with his wife and Clarice watch proudly as Rudolph guides the sleigh through the storm with his nose's light.

Santa Claus Is Comin To TownEdit

Donner appears at the start of the film with the rest of the sleigh team (sans Rudolph) guiding Santa's sleigh.

The Year Without A Santa ClausEdit

In this film, which takes place many years before Rudolph the Red-Nosed Reindeer, Donner is seen near the end of the film with the rest of the sleigh team guiding Santa's sleigh into the night.

Donner along with Mrs. Donner make a small appearance in this film when Rudolph tells Happy about his origin. Unlike the previous film, Donner has darker fur and is animated rather than stop motion.

Like in Rudolph's Shiny New Year, Donner is shown in a flashback to Rudolph's birth. However unlike the former and the original film, Donner, Mrs. Donner and Rudolph are joined by two other reindeer (either other members of the sleigh team or family/friends of Donner and/or Mrs. Donner.

Rudolph the Red-Nosed Reindeer and The Island Of Misfit ToysEdit

Donner reappears in this sequel and has a small role. His appearance has changed again, he is once again light brown (as he was in the 1964 film) and the white on his chest and underbelly is now slightly paler. 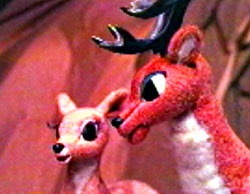 Donner and his mate Mrs. Donner 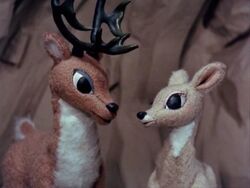 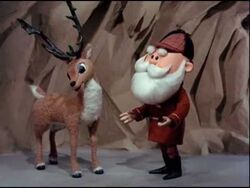 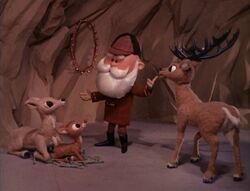 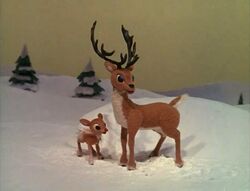 Donner and his son Rudolph 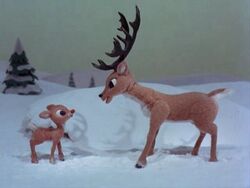 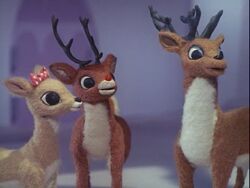 Donner with older Rudolph and Clarice

Donner in The Year Without A Santa Claus 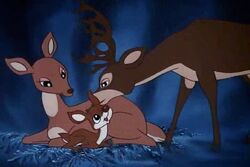 Donner along with Mrs. Donner and Rudolph in Rudolph's Shiny New Year. 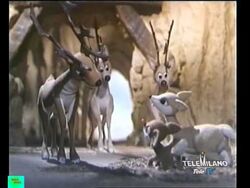 Donner in Rudolph and Frosty's Christmas in July. 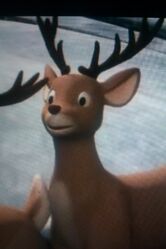 Donner in Rudolph the Red-Nosed Reindeer and the Island of Misfit Toys.
Add a photo to this gallery

Retrieved from "https://rudolphtherednosedreindeer.fandom.com/wiki/Donner_(Rankin/Bass)?oldid=10053"
Community content is available under CC-BY-SA unless otherwise noted.