Start a Wiki
Cupid is a supporting character in Rudolph the Red-Nosed Reindeer: The Movie. He is the brother of Blitzen, Dasher and Comet, the brother-in-law of Mitzi, the husband of an unnamed doe, the father of Arrow, the uncle of Rudolph and one of Santa's Flyers.

He is first seen along with Comet and Dasher meeting up with Blitzen and Mitzi who are showing their son Rudolph around Santa's Village. After Rudolph's nose lights up Cupid along with the other villagers finds this funny and sing "What About His Nose" causing Blitzen, Mitzi and Rudolph to leave. It is possible that Cupid's son Arrow started bullying Rudolph because of his father's view of Rudolph after seeing his nose glow.

He is later seen a year later on Christmas Eve along with the other Flyers taking off with Santa to deliver gifts to the children of the world whilst being watched by his son, wife, Rudolph and the other villagers.

Cupid is later seen years later with Comet at The Junior Reindeer Games after Arrow is made winner by default of The Sleigh Race and also witnesses the confrontation between Arrow and his doefriend Zoey who berates Arrow for cheating in the race and caused Rudolph to be disqualified (as Arrow taunted Rudolph causing his nose to light up and caused Arrow and the othe racers to crash) and ends with Zoey breaking up with Arrow after he discriminates Rudolph for his red nose. Cupid's reaction to the argument is not shown.

He is then seen near the end of the film once again with the other Flyers guiding Santa's sleigh through the storm with Rudolph's help.

Cupid is last seen with the other reindeer and villagers celebrating Rudolph saving Christmas. This shows that Cupid no longer views his nephew as an outcast.

Cupid makes a brief appearance in this book (which takes place after the film), where he along with Santa and the other Flyers go and search for the Sprites of the Northern Lights after they failed to appear at the winter celebrations to do their light show.

Cupid has dark brown fur with blond hair, a short goatee and has a small heart shaped marking on his forehead. He also has dark circles around his eyes which he passes down to Arrow. Like all Flyers he wears a Medal of Valor. 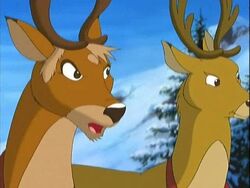 Cupid with his brother Dasher.

Cupid with his brother Blitzen and his nephew Rudolph.

Cupid with his brothers, Comet and Dasher. 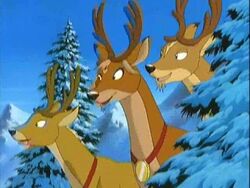 Cupid during "What About His Nose?".

Cupid, Comet and Dasher and the villagers dancing around Rudolph.

Cupid preparing to take off with the other Flyers.

Cupid and Comet watching Zoey confront Arrow for cheating in The Sleigh Race and his attitude towards Rudolph. 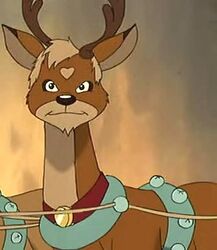 Cupid preparing to take off to deliver gifts with Santa and the other Flyers.

Cupid with Rudolph, Blitzen after returning from delivering Santa's gifts. 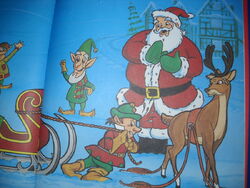 Cupid with Santa and Doggle in Christmas Town: Rudolph's Sing Along Book.
Add a photo to this gallery
Retrieved from "https://rudolphtherednosedreindeer.fandom.com/wiki/Cupid?oldid=9890"
Community content is available under CC-BY-SA unless otherwise noted.