Start a Wiki
Cupid-Clarice's father is the father of Clarice and a minor character in the 1964 Rankin/Bass film Rudolph the Red-Nosed Reindeer.

He makes two appearances in the film, first after Clarice sings "There's Always Tomorrow" to cheer Rudolph up where he tells her to go to her cave as no doe of his is going to be seen with a "red-nosed reindeer" which she reluctantly does. But later she goes against his warning and leaves with Donner and Mrs. Donner to find Rudolph.

He is next seen months later at Santa's workshop reuniting with his daughter after she, Rudolph, Donner, Mrs. Donner and Hermey return. And he forgive Rudolph an apologize but the way he acted. 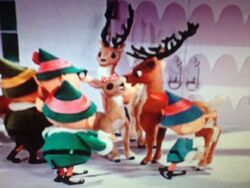 Cupid reunites with his daughter
Add a photo to this gallery
Retrieved from "https://rudolphtherednosedreindeer.fandom.com/wiki/Clarice%27s_father?oldid=10023"
Community content is available under CC-BY-SA unless otherwise noted.