Start a Wiki
Blitzen is a character in Rudolph the Red-Nosed Reindeer: The Movie. He is the brother of Dasher, Comet, and Cupid, the brother-in-law of Arrow's mother, the husband of Mitzi, the father of Rudolph, the uncle of Arrow, and one of Santa Claus's Flyers.

Blitzen is first seen at his home with Mitzi and their newborn son, whom they name Rudolph. Blitzen encourages Rudolph to take his first steps and come over to him. However when doing so, Rudolph trips and falls into a haybale. Blitzen and Mitzi rush over to see if he's okay and witness their son's nose light up for the first time.

The next day, Blitzen and Mitzi take Rudolph on a tour of Santa's Village where once again Rudolph's nose lights up when he is playing in the snow. Just then, Blitzen's three brothers and fellow Flyers Comet, Cupid and Dasher arrive to see their new nephew. Worried about what they would think of Rudolph's nose, Blitzen tries to hide him from his brothers, but Mitzi makes him stop. When Cupid tickles Rudolph and makes his nose glow, Blitzen tells the onlookers that his son has allergies, before he and Mitzi take Rudolph away. As they leave, Blitzen tells Mitzi that he'll lock antlers with the next one who makes a crack about Rudolph's nose to which Mitzi replies that their son is beautiful not odd. The two then sing "What About His Nose" where they hope Rudolph will be accepted and his red nose will be overlooked, but when the other reindeer and elves laugh at Rudolph, Blitzen sternly makes them stop before leaving with Mitzi and Rudolph.

The family then visit Santa's workshop and watch the elves singing "Christmas Town" and making toys, where one of the elves throws a teddy bear up to Blitzen who gives it to Rudolph. Blitzen and his family then witness Stormella confronting Santa over his elves Boone and Doggle destroying her ice garden (which they did by accident, by crashing their mail cart), before closing her ice bridge to the public after Santa refuses to hand over the elves, saying she will cast a storm if anyone crosses it.

A year later, Blitzen is seen at The Christmas Eve Launch with his brothers and the other Flyers guiding Santa's sleigh into the night, whilst being watched by Rudolph and the other villagers.

A few years later, Blitzen and Mitzi are seen attending The Junior Reindeer Games and watch a now teenage Rudolph take part in The Sleigh Race, which he wins, to his parents's delight. When Rudolph was disqualified because his nose lit up and caused his cousin Arrow to crash, Blitzen tried convincing the referee that it wasn't Rudolph's fault, and said that his nose "was an accident", (attempting to persuade him that Rudolph couldn't have controlled his nose's glow and avoided blinding Arrow). Unaware to Blitzen, Rudolph heard this he thought his father was ashamed of him, while in reality Blitzen blamed his son's nose for the problems it caused, not Rudolph himself.

When Rudolph ran away, Blitzen and Mitzi were worried for their son and Blitzen blamed himself, convinced that he didn't protect Rudolph enough from the ridicule of everyone at the North Pole. Blitzen and Mitzi go to Santa for help and are soon joined by the mother and father of Rudolph's friend Zoey, who had left to look for him.

When Rudolph returned home with Zoey and his new friends Slyly and Leonard, Blitzen was glad he was safe, and when Santa made Rudolph an official Flyer, Blitzen was proud of him and relieved that his son's nose became Rudolph's strength and no longer his weakness, and Blitzen's worries for his son were finally put to rest.

Rudolph the Red-Nosed Reindeer: A Retelling of the New Animated MovieEdit

In this book based on the film, Blitzen appears when he, Mitzi and Santa worry about Rudolph after he runs away and second at the end of the book when he and the other Flyers guide Santa's sleigh through the storm with Rudolph's help.

Set after the film on the first day of winter, Blitzen and the Flyers go with Santa to look for the Sprites of the Northern Lights after they fail to show up at Santa's Winter Celebrations to do their light show. The next morning, Blitzen returns home and tells Mitzi that he and the Flyers didn't find the Sprites, but will look again after a hot breakfast and a nap.

Luckily Rudolph and Zoey find the Sprites (after they were caught by Ridley to put on a private surprise light show for Stormella) and they perform their light show.

Blitzen has light brown and cream fur, brown eyes (which he passed down to Rudolph) and has two lightning bolt-shaped markings on his muzzle. Like all Flyers he wears a Medal of Valor.

In Rudolph the Red-Nosed Reindeer: A Retelling of the New Animated Movie and ' 'Rudolph Saves The Sprites, Blitzen has dark brown fur and does not wear his Medal of Valor. 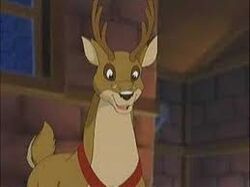 Blitzen with his mate Mitzi and their son Rudolph. 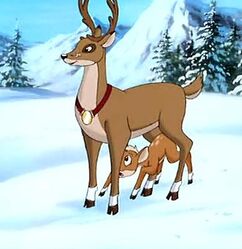 Blitzen trying to hide Rudolph from Comet, Cupid, and Dasher.

Blitzen with Rudolph, and his brother Cupid.

Blitzen getting upset that Rudolph is being laughed at. 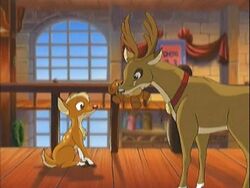 Blitzen giving a teddy to Rudolph.

Blitzen in a photograph with Mitzi and Rudolph.

Blitzen and Mitzi happy that Rudolph has returned.

Blitzen and Mitzi reunite with Rudolph. 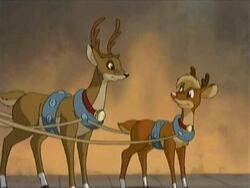 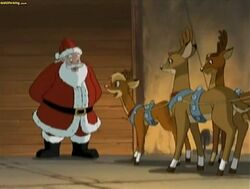 Blitzen, Rudolph, Cupid, and the rest of the Flyers after returning from delivering Santa's gifts. 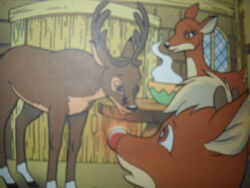 Blitzen with Mitzi and Rudolph in Rudolph Saves The Sprites

Retrieved from "https://rudolphtherednosedreindeer.fandom.com/wiki/Blitzen?oldid=9889"
Community content is available under CC-BY-SA unless otherwise noted.