Start a Wiki
Arrow is the son of Cupid and an unnamed doe, the nephew of Blitzen, Comet, Dasher, and Mitzi, the cousin and former rival of Rudolph, the ex-boyfriend of Zoey, and the secondary antagonist of Rudolph the Red-Nosed Reindeer: The Movie.

In the end, he reforms and becomes a jerk with a heart of gold.

Arrow is first seen as a yearling buck in Mrs. Prancer's class with his cousin Rudolph and Zoey, a young doe who is Arrow's doefriend. It is established that Arrow is very arrogant and narcissistic as when the class are discussing The Junior Reindeer Games and Flyers, he says that his father Cupid told him that "he was born to be a Flyer, just like him". When Rudolph expresses his wish to join the team, Arrow tells him he can't because of his nose, then he and the rest of the class, with the exception of Zoey and Mrs. Prancer, laugh at Rudolph, causing him to leave the school.

Arrow is later seen on Christmas Eve with his mother watching his father, uncles and the other Flyers, guide Santa Claus's sleigh into the sky, before catching Rudolph about to kiss Zoey under a mistletoe. Zoey tells him not to get jealous, and that she and Rudolph are just friends. Arrow denies being jealous of "Ruddy the Red-Nosed Reject" and tells Zoey come with him (which she does reluctantly) and laughs at Rudolph and calls him a loser as he leaves. But Zoey gives Rudolph a kind smile, making Rudolph see that she likes him.

Years later, at The Junior Reindeer Games, Arrow now a teenager and has remained in a relationship with Zoey. At the start line for the Sleigh Race, he sees Rudolph wearing Zoey's pendant (which she gave to him for good luck) and tells him that Zoey is "his doe", but Rudolph gets the last word by telling his cousin that Zoey is not a trophy and shouldn't be treated like one.

When the Sleigh Race starts, Arrow (determined to be chosen to be a Flyer by Santa) starts cheating by crashing into other racers and knocking them off the track. He then taunts Rudolph by saying Zoey is only nice to him because she feels sorry for him. Rudolph says that's not true, but Arrow says it is and that Zoey told him so. Angry at these taunts, Rudolph's nose lights up and causes Arrow and his elf driver to crash. Rudolph and his driver Doggle win, but due to his nose going off, Rudolph is disqualified for supposedly cheating and Arrow is made winner instead. He is joined by Cupid, his uncle Comet and some elves, where Zoey confronts him about the cheating. But a unrepentant and conceited Arrow replies that the point is he won, and Santa is going to notice him. Zoey gets angry at him, saying he's no Flyer and that Flyers are brave and they have character and true hearts like Rudolph. When Arrow points out that Rudolph has a red nose, therefore unworthy to be a Flyer in his perspective, which causes a disgusted Zoey to call Arrow shallow. Arrow starts to answer back, but is cut off by Zoey, who says that she doesn't want to be his doefriend anymore. Arrow is upset by this and silently walks away from Zoey.

Arrow is last seen watching Rudolph returing from helping Santa and the Flyers deliver presents through Stormella's storm with his nose's light. Arrow is seen happily singing "Rudolph the Red-Nosed Reindeer" with the other villagers. This shows that Arrow perhaps had a change of heart and no longer dislikes Rudolph.

Rudolph the Red-Nosed Reindeer: A Retelling of the New Animated MovieEdit

In this book based on the film, Arrow appears twice: First when he and other reindeer tell Rudolph that he can never be a Flyer because of his red nose and second at The Junior Reindeer Games during The Sleigh Race where he once again tells Rudolph that he can't be a Flyer with a nose that glows, causing Rudolph's nose to light up which gets him disqualified.

Unlike the film, Arrow's relationship with Zoey is never mentioned and that he isn't seen reforming. His fur also changes, with it being gold (like in the film) in his first appearance and dark brown in his second appearance.

Arrow (once again with dark fur), is seen briefly at the start of the book (which takes place after the film), where he is seen attending the Winter Celebrations, along with Rudolph, Zoey, Santa, Mrs. Claus and the other reindeer and elves.

As a yearling, Arrow had light gold fur, brown eyes with dark circles around them and has spiky blonde hair. When becoming a teenager, Arrow looks the same except with now light brown fur and short antlers.

In Rudolph the Red-Nosed Reindeer: A Retelling of the New Animated Movie, Arrow's fur changes twice: In his first appearance, his fur is the same colour as it is in the film, but in his second appearance, it's dark brown.

Arrow greatly resembles his father Cupid as they both have blonde hair (though Arrow's is longer at the front and spiky and has no hair at the sides of his head) and both have dark circles around their eyes, though unlike his father, Arrow doesn't have a heart marking on his forehead.

From his mother, Arrow gets her muzzle and her build. He also, when becoming a teenager gets both his parents's brown fur, though Arrow's fur is slightly lighter (perhaps getting the light tones from his uncles Dasher, Comet and Blitzen as they have lighter fur colours than Cupid. 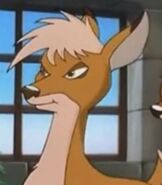 Arrow at school with Rudolph and Zoey.

Arrow telling the class about how Cupid told him he was born to be a Flyer.

Arrow telling Rudolph that he can't be a Flyer because of his nose.

Arrow watching Santa and the Flyers take off.

Arrow with possibly his mother 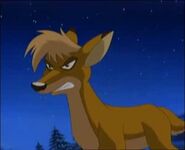 Arrow angry after catching Rudolph and Zoey are together. 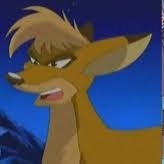 Arrow telling Zoey to come with him.

Arrow and Zoey leaving together.

Arrow knocking another competitor off course.

Arrow getting blinded by Rudolph's nose.

Arrow after Rudolph's nose causes him to crash.

Arrow after being made winner of the Sleigh Race.

Arrow being confronted by Zoey for cheating in the race. 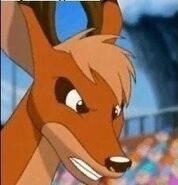 Arrow being called shallow by Zoey.

Arrow with his father Cupid, his uncle Comet and Zoey.

Arrow after Zoey ends their relationship.

Arrow with Zoey and Zoey's parents after Rudolph and the Flyers return.

Add a photo to this gallery
Retrieved from "https://rudolphtherednosedreindeer.fandom.com/wiki/Arrow?oldid=9766"
Community content is available under CC-BY-SA unless otherwise noted.